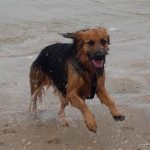 Know dogs have amazing noses. Scientists say their sense of smell is anywhere between 10,000 and 100,000 times more acute than ours. While humans have a mere 6 million olfactory receptors in our noses, dogs have somewhere around 300 million, according to Nova.

But that doesn’t mean their idea of what smells “good” matches our sensibilities.

If your canine buddy runs across an overturned garbage can or something dead in the backyard, there’s a good chance he’ll roll around in it until he’s good and stinky too. Does your dog just like the gross smell or is there some other innate reason for what we think is a disgusting habit? Animal behaviorists have several theories.

They’re trying to hide their own smell

Well-known dog expert and psychologist Stanley Coren, author of many books on dog behavior, says the explanation that seems to make the most evolutionary sense is that dogs roll in odoriferous things to disguise their own scent.

“The suggestion is that we are looking at a leftover behavior from when our domestic dogs were still wild and had to hunt for a living,” Coren says. “If an antelope smelled the scent of a wild dog, or jackal or wolf nearby, it would be likely to bolt and run for safety.”

But if a dog’s wild ancestors rolled in the dung of antelope or carrion, prey antelopes would be less suspicious than if the animal smelled like its true self. This would allow those wild canines to get closer to their prey.

Animal behaviorist Patricia B. McConnell is skeptical of this theory.

“First off, most prey animals are highly visual, and use sight and sound to be on the alert for predators. It’s not that they can’t use their noses, but their noses are dependent on wind direction and so sight and sound are often more important,” McConnell writes, noting that’s why hoofed animals have eyes on the sides of their head and ears that swivel around, in order to see and hear animals sneaking up from behind.

“In addition, if a prey animal’s sensory ability is good enough to use scent as a primary sense for predator detection, surely they could still smell the scent of dog through the coating of yuck. Neither does this explain the intense desire of dogs to roll in fox poop.”

Just like a cat will rub up against you to mark you with its smell, some behaviorists theorize that a dog will roll in something stinky to try to cover up the smell with its own scent. Just like dogs will roll around on a new dog bed or toy as if they are trying to claim it as their own, Coren writes, some psychologists have suggested that dogs will roll in grossness or rub against people trying to leave a trace of themselves.

Again, McConnell disagrees, pointing out that dogs have much easier and effective tools if they want to make their mark.

“This idea makes little sense to me, since dogs use urine and feces to scent mark just about everything and anything,” she writes. “Why bother with the milder scent of a shoulder or the ruff around one’s neck when you’ve got urine to use?”

Being smelly is a way to communicate to other dogs what a dog has found. (Photo: Ivica Drusany/Shutterstock)

Dogs might roll around in smelly things because it’s one way to bring news back to the rest of the pack about what they’ve found.

“When a wolf encounters a novel odor, it first sniffs and then rolls in it, getting the scent on its body, especially around the face and neck,” Goodmann says. “Upon its return, the pack greets it and during the greeting investigates the scent thoroughly. At Wolf Park, we’ve observed several instances where one or more pack members has then followed the scent directly back to its origin.”

But it’s not just gross smells that attract this rolling behavior. Goodman placed an array of smells in the wolf enclosures and found that the wolves were just as likely to roll in mint extract or perfume as they were to get up close and personal with fish sandwiches, elk droppings or fly repellent.

Motor system link to the brain

Yet another theory, according to Alexandra Horowitz, author of “Inside of a Dog: What Dogs See, Smell, and Know,” who runs the dog cognition lab at Barnard College, is that there’s a link between the nose and the brain. A stinky odor that lights up the olfactory lobe in a dog’s brain also works on the brain’s motor cortex. That communication tells the dog to get some serious contact with the smelly new discovery, Horowitz tells the New York Times.

“There’s no ‘noxious scent’ receptor in the dog’s brain,” she added. “But they do seem particularly interested in rolling in smells that we find somewhere between off-putting and disgusting.”

It makes them feel cool

But maybe the reason dogs roll in gross things is to show off to their canine friends. It could be the same reason some of us wear flashy clothes or smelly perfume.

McConnell calls it the “guy-with-a-gold-chain” hypothesis.
“Perhaps dogs roll in stinky stuff because it makes them more attractive to other dogs,” she says. “‘Look at me! I have dead fish in my territory! Am I not cool?!’ Behavioral ecology reminds us that much of animal is related to coping with limited resources — from food to mates to good nesting sites. If a dog can advertise to other dogs that they live in an area with lots of dead things, then to a dog, what could be better?”

Can you stop the rolling?

Get used to giving baths or keep your dog on a leash. (Photo: Shevs/Shutterstock)
Whatever the reason for your dog’s roll in the muck, there’s little chance you can get him to change his habits.
“With thousands of years of practice backing their interest, dogs will continue to go boldly where no man, or woman, would ever choose to go,” says veterinarian Marty Becker. “The only surefire way to stop the stinky sniff-and-roll is to keep your dog on the leash or teach a foolproof ‘come-hither’ when called.”