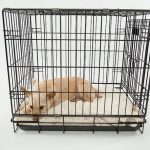 Many people think that crating a puppy is normal, and not crating them is strange, because so much literature on dog training refers to crate training as if it’s the only way to toilet train a puppy and prevent it from destroying the house. I am personally very much against crates, with the exception of if a dog has an injury or needs to be prepared for travelling somewhere. 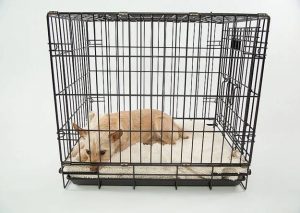 Think about it – how absurd is it that it’s considered normal to confine an animal to such a small cage for such prolonged periods of time, with this space often being just a little larger than their body size? Would it be acceptable to keep a cat like that? How might you feel if you saw a zoo animal kept in such a small cage? In comparison, the majority of hamsters and other rodents live it up in multi-story penthouses. In fact, the only other animals that often suffer this same fate are many horses, guinea pigs and rabbits!

Here is my run down of why I personally think we should not be crating our dogs from the get go:

More than once I’ve seen two or three dogs crammed into a crate designed for one small dog. I’ve seen dogs unable to turn around, dogs being left without access to water (another basic need) for hours on end, and dogs shut away for 8-10 hours a day with no bed or mat – just the plastic crate floor to lie on (because they soil their bed or rip it up). This is what the crate training concept has got people thinking is acceptable, and it’s not acceptable at all. If you really think about it, it’s immensely unfair and no wonder so many dogs develop anxieties, frustrations and fears when that is the daily life they lead.

As with all things, it often depends on the dog. Some dogs genuinely do like their crate and want to go in it. That’s fine, keep the crate – but why shut the door? I feel that we should be more trusting of our dogs and not worry that they’re going to wreck our houses with toilet accidents or chewing. We do so well at treating them as part of the family in every other way, so let’s make that truly the case and ditch the cages!

Roz Pooley is a dog trainer and behaviour counsellor, and the owner of The Mutty Professor in Bristol.
www.themuttyprofessor.co.uk

“No matter what the animal, force is the enemy of confidence and trust “ – Peta Clarke